I finally found a decent place to get the movie posters done, not the full size poster I would like, but the quality and reliability of the company seems pretty decent. I've only ordered one poster from them, however I was really impressed with the shipping and their pricing and the overall quality of the printed image.

So, here it is, the movie poster. I may make a few adjustments here and there, but ultimately this is the final look. So, if anyone wants one, I think they'll be around $30 each, 32" x 24", I think about $7 shipping and handling, and they're shipped in a hard plastic tube (so no squished posters!). 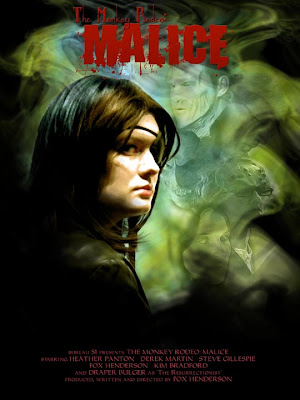 I intend at some point to get one for everyone involved in the project who wants one, but anyone outside the project, put in an order - not sure when I'll be getting them, but I'll keep everyone updated here.
Posted by The Monkey Rodeo at 2:14 PM No comments: Links to this post

Finally getting around to editing

Like the title says, I'm finally getting around to editing. Editing what? The White Room scenes.

Well, I'm pretty much happy with everything. Not entirely, but as much as can be expected. The reason I'm not entirely pleased is really no one's fault by my own. As I mentioned before, I'm not a fight scene director - so I really have no idea what I'm doing. I actually have a much better grasp on things now. The one thing that really makes the difference is rehearsal. I certainly don't blame my actors, they did a great job - they just did what I told them, which is where things went wrong.

To be a little more precise, the only real problems were the actor's positions in certain shots, they don't really match up sometimes and as a result it feels a little clunky, even though it's a pretty tight edit at the moment (I will be going over and over it to see what I can do). That's not to say by any means that's it's terrible and we wasted our time, by no means, there's really only 2 or 3 shots I'm not thrilled with, otherwise it's really not bad at all - I'm just being overly critical.

From there the cleanup and post work on the shots is going to be incredibly time consuming, although. The entire sequence comes in just shy of 1 minutes 30 seconds, not too long, nice and quick and to the point.

This was basically a lesson for all of us I think. We have one more fight scene (two really, but the third one is mostly CG), so I think we definately will be doing some rehearsals, filming the rehearsals and just end up shooting the hell out of the scene so there's nothing we miss. As I said, only real complaint was lining up the shots - with a little editing I was able to clean up almost all them, a couple just can't be helped though.

I was going to post some storyboard/shot comparisons, then I realized I didn't want to show off The Resurrectionist too much right now - so sorry, nothing to see here.

Well, I did as much I could last night, then decided to just leave it and come back the next day. Since I've been sleeping less then usual I had some time to think about some of the shots - specifically the ones that didn't match up.

Believe it or not I was able to reuse some older shots, very creatively to fake the shots I was missing. Some I just had to reverse, others I flipped horizontally. And quite honestly if anybody could point out the difference seeing it once or twice - I'd probably spontaneously combust, or they're just a bloody lying wanker.

In one case, I decided to fix up a shot where the Resurrectionist gets a boot to the face. Now the shoot looked fine, but I came up with an idea to make it a little better. There was one take where the timing was way off, so I actually had a blank shot of the character flying back without a foot in the shot. So, I removed the foot from it's 6 frames and repositioned it in the shot to match up with the reaction and ended up with a perfectly timed boot to the head.

In the end, still not a perfect fight scene, but much better then what I originally had only 12 hours ago.
Posted by The Monkey Rodeo at 8:44 PM No comments: Links to this post