Malice might not be going anywhere anytime soon, but Demon Rum has been progressing pretty well. We've got all our actors rounded up (that was the hardest part), the location, a basic shotlist, props and even sound has pretty much been taken care of.

I'm just waiting for the prosthetics to come in, there should be a pretty decent cross section of creatures in this movie. A lot of the online shops I use tend to release new ones close to this time of year, so there was some really cool new stuff to chose from. 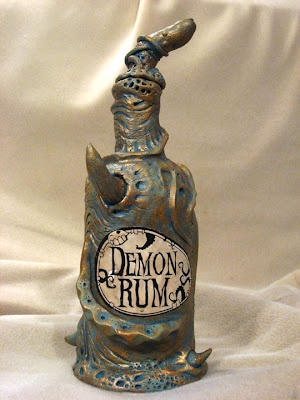 That's it really, not too much else on the go. As I mentioned, Malice is on hold until I finish off another project I'm nearly done with. After that I'll be making some major headway with it. Until then, Demon Rum will take up a couple days - there should be some good pictures to post from it once we're done. I plan on shooting in 2 to 3 weeks.
Posted by The Monkey Rodeo at 7:17 PM No comments: Links to this post

I believe I mentioned that next year I'm doing a series of short Monkey Rodeo movies. The first one, Demon Rum, will actually be shot next month if all goes as planned. It requires only 4 actors, a large apartment and one night of shooting - we got 2 actors and a large apartment at the moment.

The (sort of) main character of the movie is the Demon Rum itself. I could've let myself off the hook easily and just used something common that I bought at Winners or something like that, but I wanted something unique - as is the point to doing these short movies.

I want to take each movie and put as much work into it as I did with the feature, that mainly includes, prosthetics (I will be learning how to make my own very soon), props (I'll be making most of these as well, and creating more rubber weapons too) and more CG creatures of course.

I was just about to start going on about what I most like about movie making and what I'm getting horribly bored of. Right now, if I don't have at least one standout thing per scene in whatever I'm doing - I might as well scrap the project. Two people sitting in a room talking, no matter how interesting the conversation, is boring to me - now make one of them a 10 foot tall, 3 headed, fire breathing demon and I'm sold.

And that's pretty much the principal behind The Monkey Rodeo Project, to throw as much crazy assed stuff onto the screen as possible. It's hard to work all the ideas into a single feature length movie, but if you chop it up into several 10 minute movies -you can pretty much do whatever you want.

So, back to the point. The bottle of Demon Rum. I wanted something that no matter how tasty whatever is inside might be, you'd probably think twice about it given the look of the bottle. So, I had to make it myself, it myself, took about 5-6 hours. I still need to put a cork in the bottle, and I've yet to decided exactly what I'm doing with that part. As well, there's a label that has yet to be created and stuck to it. But otherwise, here it is. 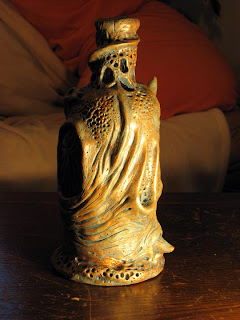 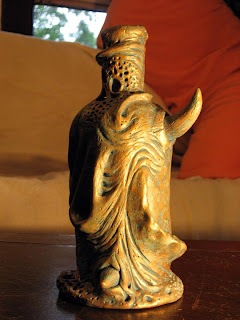 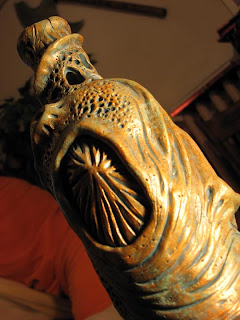 The pictures almost don't do it justice. I need a better setup for taking pictures of my props I think. In any case, I'm pretty damned happy with the final outcome. I never sketched out any ideas or anything, it was more or less made up as I went along. And yes, it is modeled over a bottle of Absolut.

Given how it turned out, I'm looking forward to some of the other props I had in mind but wasn't too sure of.
Posted by The Monkey Rodeo at 11:52 AM No comments: Links to this post

Prelude to the Awesome Thing

There was that "something awesome" I mentioned in the last post. Well, it is indeed awesome - depending on how you take your awesome that is.

In any case, it's partially done. I need another day and some more supplies (nothing major) and I will reveal the ending to this nail biting mystery...or I'll terribly disappoint you, either way I'm actually pretty happy.

So iffen you're the sort to check here a lot in the hopes of something new to ogle, well be prepared to ogle your little brains out...I just realized there's no way in hell I can live up to this hype I just created, so my only hope is you're all poor readers or are currently on serious mediation that prevents you from getting all excited. Don't operate any heavy machinery and check back on Friday (hopefully).
Posted by The Monkey Rodeo at 10:39 PM No comments: Links to this post

There's at least another year's worth of stuff to blather on about, so if you're willing to keep reading, then I'll more then likely keep posting stuff. Even if you don't bother reading actually.

I'm still working at getting my last few shots. Hopefully soon, real world work has been keeping be both occupied and annoyed (as any real job, good or bad, should), so I haven't had a lot of time to work on the movie or editing. Plus I'm very, very close to finishing another project, the animated movie I'm doing with Dan Caseley - it's coming along slowly, but we're so close to having the animation part of it complete.

So I reckon in another month or so I'll have way more time for Monkey Rodeo stuff, until then you probably won't hear from me.
Posted by The Monkey Rodeo at 5:38 PM No comments: Links to this post