So far the response to Bimbo Zombie Killers! has been pretty awesome. I've even heard praise from folks who don't like that kind of movie. I guess that's pretty good.

I knew getting one movie finished would help motivate me into getting some other stuff done. I managed to get all the recorded dialog into place on the 3D movie. There's a few more lines to be recorded still, but I reckon by the time I'm done the sound effects they'll be done as well. All that's left after that is he music.

My plan was to do the soundtrack for the 3D movie myself, using a Theremin. The more I think of it, the more I'm not sure the whole soundtrack done that way is a good idea. We'll have to see how things progress with that.

Otherwise, I'm hoping to get things moving on Cronus soon as well. About half the dialog is recorded, just not edited into place - that's going to be real fun.

Well, that's all the news for now.
Posted by The Monkey Rodeo at 11:59 PM 1 comment: Links to this post

Here it finally is.

Posted by The Monkey Rodeo at 5:48 PM 2 comments: Links to this post

After saying yesterday that not much was progressing, well, Bimbo Zombie Killers! is done...almost. Now that's not to say, "In about 3 more weeks" or anything like that. Wednesday, maybe even Tuesday evening.

Main reason for the sudden finishing was all that was missing up until now was one of Heather's lines and some foley for the jugs (it's near impossible to find good foley for ceramic jugs, most "ceramic" foley was little tea cups and crap), and then there was the matter of the soundtrack. Well, it seems the guy I had lined up is moving away and I just didn't want to deal with it being put off any longer (not that it was his fault, totally mine) so I sat down last night and rummaged through some royalty free stuff and managed to find 3 or 4 really good tracks that all had the same sound to them.

And the soundtrack was done. The reason for it not being done right now? I have to wait until I get some extra money to afford it, should be tomorrow.

Getting this one movie done has also served to get me motivated again - it was about time. So I'm making more of an effort to move on them. Who knows, you might see another one in about a month or even sooner if all goes well. 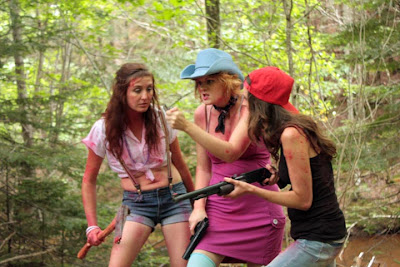 When Bimbos discovered fire.
Posted by The Monkey Rodeo at 12:12 PM No comments: Links to this post

Updates are becoming few and far between

There's no real reason, other then nothing is going on. The last 2 projects I was going to try to do this year have been put on hold to whenever, the scripts just are coming along at all and I just don't seem to be motivated enough to make any headway on them.

However, there is some minor good news. The musical we're doing next year, Social Lives of the Undead has a really great story - no script yet though. And I managed to get permission from John Coulton to use the chorus from his song "Re: Your Brains", we'll be rewriting it slightly to fit the movie better, so that's kind of cool. If you don't know who he is, he does some really strange, but really cool song. I would venture a guess and say "Still Alive" from Portal is his most famous.

I think it's pretty cool in any case.

Otherwise, I'm plugging away at the audio for other movies. Awesome fun.
Posted by The Monkey Rodeo at 1:02 PM No comments: Links to this post

Things have come to a standstill, not much progress on anything. Not sure why, just seems to have happened - not like I'm terribly overwhelmed by some other project. Probably just as well anyway, I probably could use the prolonged downtime.

In any case, all that's left is audio, lots and lots of audio. I'm sure I'll get to it soon enough though. Until then, I will leave you with this totally unrelated to any movie I'm doing picture.

Defective kitty needs to be sent back
to the manufacturer for repairs. 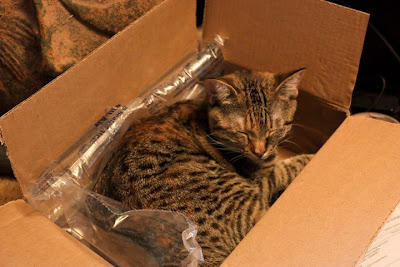 Posted by The Monkey Rodeo at 4:46 PM No comments: Links to this post