The title pretty much says it all. 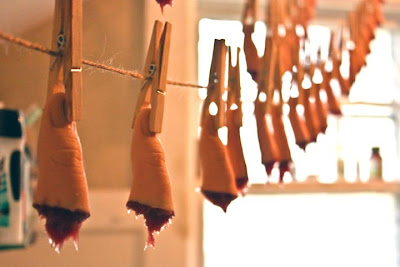 This is the 2nd stage in creating them, next is the final paint job and they'll be ready to go into the online shop. If you're interested, they're $12 each. There's 4 different versions, two fingers (male and female) and two thumbs (male and female), you can pick what one you want, or all 4 for $40. Severed toes possible coming soon.

Posted by The Monkey Rodeo at 11:30 AM No comments: Links to this post

Finally got Derek and Graham together at the same time to get this done. Obviously done to resemble the Lethal Weapon poster, since the whole movie is meant to do that as well. 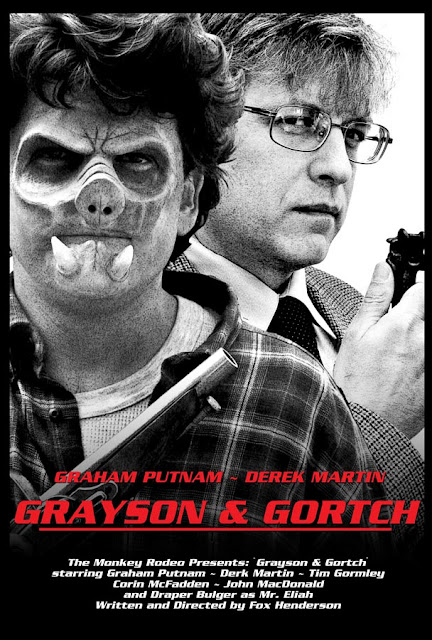 Got another couple small scenes done today, took a little longer then planned but it was kinda fun since there was no script, no lines or anything, just Graham and a very small Boler Trailer thanks to Gary McGregor.

I'm hoping to get to go over the footage and the photos later tonight, maybe tomorrow morning and post some more stuff.
Posted by The Monkey Rodeo at 6:10 PM No comments: Links to this post

The Shop is up and running now, as good as it's going to get for the moment - not that it means it's a crappy piece of ineffectual online retail garbage, just that it's rather limited for the moment. Right now there's just a few foam latex prosthetic makeup appliances for sale, more coming soon enough.

I'm hoping soon to get some foam weapons online, a fake foam axe, fake foam sledgehammer and a fake foam vampire stake (which isn't working out so well at the moment). Otherwise I've been busy getting these badyboys ready. Severed Fingers! They're made from a soft flexible silicone. There'll be a male finger and thumb and a female finger and thumb - debating about making severed toes as well.

They'll go for $12 each, or a batch of all 4 different digits for $40 and if I can get the PayPal to properly work it, I'll allow for a mixed batch of 4 digits at the same price.

Here's the first batch in their raw, just pulled from the mould state - there will be more work done on them to finish them up for sale. Hoping to get them online this week if I can. 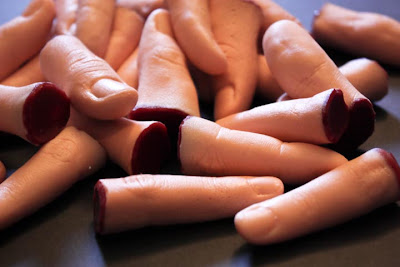 Until then, if you haven't seen the website, feel free to pay a visit.

Posted by The Monkey Rodeo at 3:47 PM No comments: Links to this post

This is directed to folks on Prince Edward Island, unless you plan on being here in about 3 weeks time, this might not be all that interesting.

For the movie "Grayson & Gortch" we're doing a scene that's basically a raid on a junkie vampire den. Our two main characters meet for the first time and have a brief chat while they slaughter a house full of crazed vampires. The scene also involves some hostages being held by the vampires.

VAMPIRES:
So what I'm looking for are about 12 vampires. I've got a few right now, I think 3 or 4. I need fairly agile people, since they will be running in short bursts - right before being killed. So there will also be some stuntwork involved as well, it won't be simple. So if you're not even vaguely athletic, this might not be for you.

There will be prosthetic makeup involved, just a vampire forehead. As well as false teeth, hopefully. These teeth are just cheap caps that we might have to fasten on with gum.

Dress like a homeless person, there will be blood as well, so nothing you don't mind getting stained.

I'm looking for mostly adults at this point. Although I don't mind if I end up with 1 or 2 younger vampires, just be aware it's slightly violent, there'll be some cursing and swearing and it could be bloody.

HOSTAGES
I might double up by taking some of my vampires and making them hostages as well, since we never see all of them ever together in a scene. I need about 4. So if you're coming out to be a vampire, dress normally, but again nothing you don't mind getting dirty, I may make you into a hostage first then into a vampire.

We will be shooting this late September/early October on a Sunday morning just outside of Charlottetown. I've no idea how long we'll be shooting. The scene is about 3-4 pages, so roughly 4 hours at least. Not everyone will be require to stay the entire shoot - but you're more then welcome to stick around if you want to watch.

If you haven't read this somewhere else or mentioned you wanted to be involved - this is volunteer work as well - you can email me at casting@themonkeyrodeo.com and let me know. I'll be in touch with everyone at least a week before the shoot.
Posted by The Monkey Rodeo at 1:25 PM No comments: Links to this post

We had another shoot last night, went great. It was fast, I made it more complicated then it needed to be, but it still worked. Missed one shot, or I guess I should say I didn't realize I needed to do another shot until I started thinking about it after we were done shooting. No worries though, I haven't edited yet so I don't know if it'll be a problem - and it's an easy shot to retake, 2 minutes and it could be done. We'll be shooting on location again, so I might go for it next time.

And in online shopping cart news, it's an absolute confusing nightmare. I tried PayPal - pain in the ass with no way to properly calculate shipping in Canada before the buyer pays. I thought I'd create a merchant account so I could process credit card orders myself - the company I contacted don't seem to really want me to. I tried using Wordpress, I saw a friend of mine using it and it was perfect - I can't figure it out for the life of me and it just made my entire site a mess. Could've been me though.

So now I'm trying something else. We'll see how this goes. Otherwise, here's some demons in a boxing club: 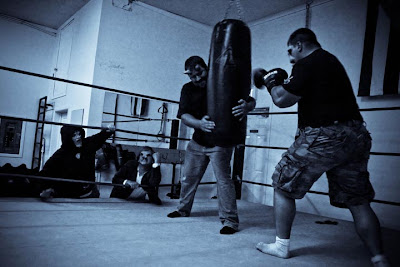 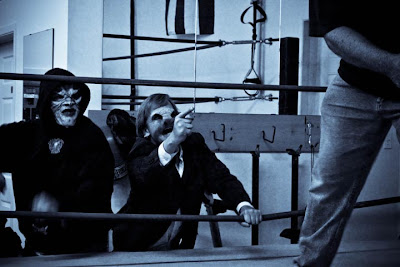 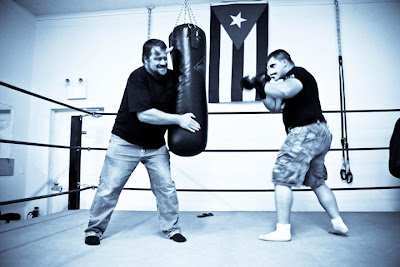 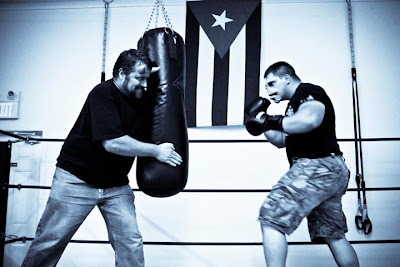 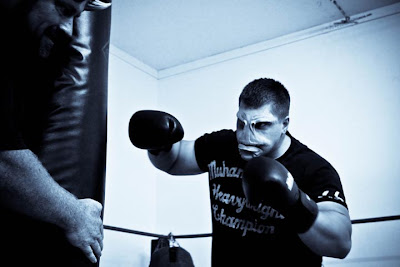 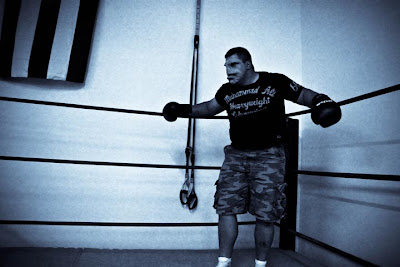 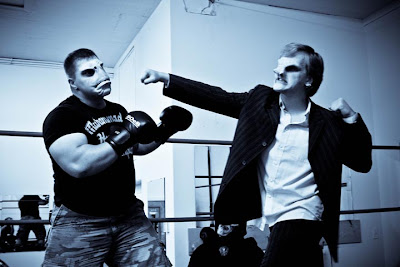 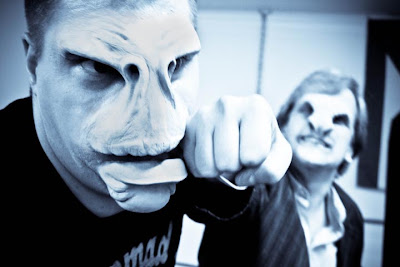 Posted by The Monkey Rodeo at 11:21 AM No comments: Links to this post 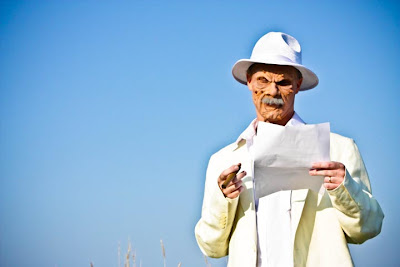 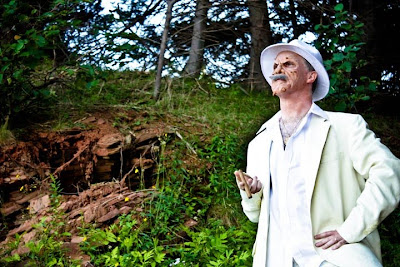 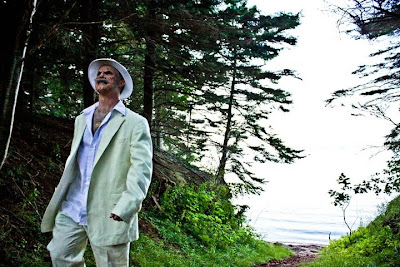 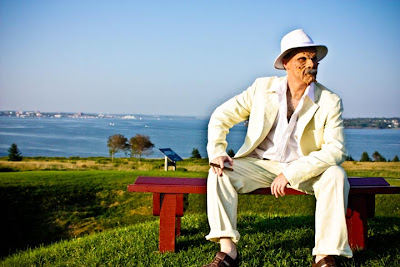 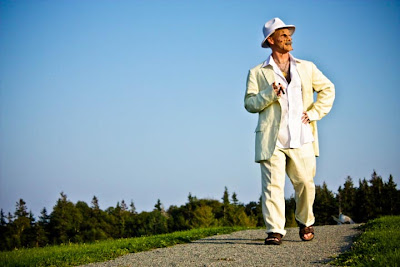 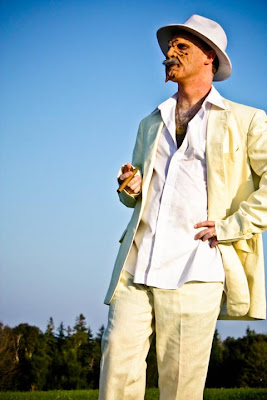 You can buy the prosthetic used in the shoot here:

Posted by The Monkey Rodeo at 7:41 AM No comments: Links to this post