I thought I'd do up a quick post about the swords I'm using in the last scene. During the course of my prop and costume hunting for the movie I came across the term LARP. I had no idea what in the hell this meant, I saw it mostly on eBay, along with MIB (which I thought was Men in Black, but turns out it's Mint in Box). LARP stands for Live Action Role Playing - aside from being a slightly kinky predilection for some folks, it's another term for people who like to get dressed up and fight pretend evil.

An easier to understand version is "re-enactment actors", or those kids who go to renaissance fairs. Although it's not simply limited to medieval themes. Take any role playing game and do it live action...and there you go.

At first I was seeing some weapons mainly, then some random props and costumes. I looked into it, out of curiosity, and eventually realized there's a lot of great props out there for LARPing. Which, in turn, become great props for movie making. Great, but not cheap.

I had no real use for LARP weapons, they're usually silly cartoony looking things you use to beat on fat guys dressed like minotaurs, or part-time shoe salesmen from Minnesota. These are sometimes called "Boffers" depending on how they're made - from what I understand, it's the more homemade looking ones.

These are some very homemade looking weapons.
Usually PVC pipe, or even bamboo, and padded with
foam and duct tape to hopefully resemble a weapon. 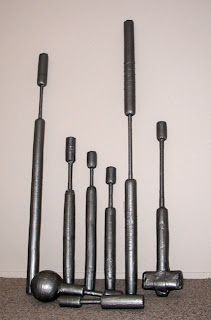 These ladies here have some bow and arrow Boffers.
Not terribly believable, but they work for what
they're intended I reckon. 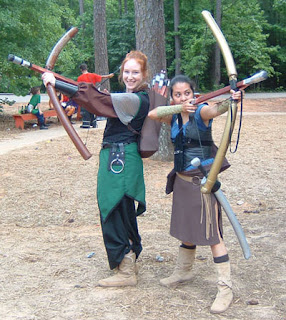 After a fashion I began to see some pretty decent looking ones, so good that without any direct comparison, you'd never know the difference.

I decided this would be a good way to go for the new opening. It was one of many minor things that brought the idea together, it couldn't be done without many strange little things I stumbled upon over the course of the entire movie.

There are different types of the high end LARP latex weapons (yes, they're made of latex). Some are pretty simple, some are rather insane looking. You can even get latex shields as well...although it's not as weird as it sounds.

The ones I eventually settled one were a little more expensive then the ones I first had my eye on. And they're made in Canada, in Quebec to be exact. Take a look at http://www.calimacil.com. They have some pretty good stuff, some are pretty simple and some are pretty nice looking.

One thing that attracted me was this thing they called a hybrid core, normally these weapons are supposedly made with a fiber glass core, the hybrid cores are also reinforced with carbon fiber. Makes them more durable and they react more like a real metal sword when swung - although they're incredibly lightweight.

So after hunting and debating cost, I settled on the Calimacil swords. The ones I went with are replicas of swords from Lord of the Rings. And then I stumbled upon another site that had a cheap real version of the same swords. I only needed a real version of one of them though. So we'll use the real one up until the actual fight - then swap it out for the latex one. Hopefully it won't be too obvious. 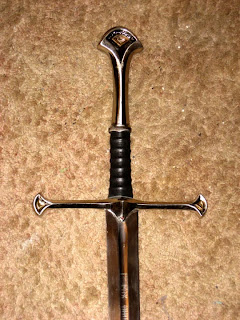 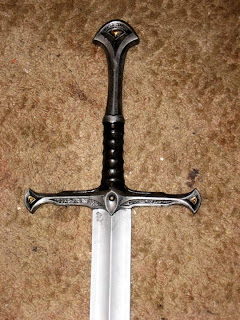 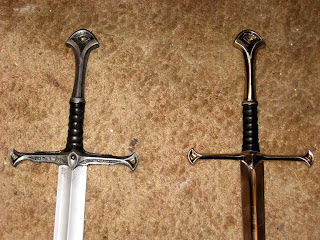 Side by side the differences are incredibly obvious. I'm hoping those differences won't show up while it's being swung around like crazy. One thing I didn't bother pointing out here, and I never realized from all the pictures I saw, but the blades are really thick. They're thickness is tapered too at that. They start out about about half and inch and widen to a full inch, if not more, at the tip - which apparently makes it good for stabbing, otherwise they're just good for whacking...That didn't sound quite right.

That's about it for now. This has been a public service announcement for the use of latex weapons. If you simply must smack someone safely, do it with latex...or not. Man, you just can't use latex in a sentence without conjuring up some major inappropriateness.
Posted by The Monkey Rodeo at 11:49 PM 1 comment: Links to this post

The location I had in mind I haven't been to in about 10 years. Luckily it was pretty much as I remembered it, a little more eroded, not that it's a problem. I wanted something a little bleak and desolate looking - and not one man made structure of any sort in the background.

We'll be heading up to the north shore in between North Rustico and Cavendish, it's not a very well traveled road as far as I know. I was hoping things were a little more frozen and barren looking, but with the warm weather lately aside from some chunks of snow there's not much "frozen" looking going on. 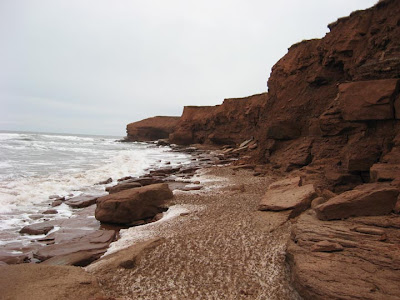 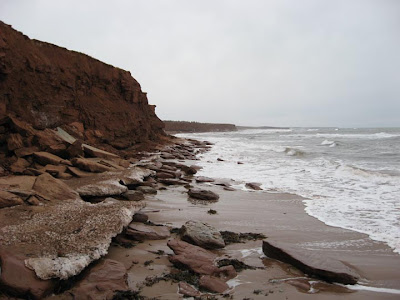 The only problem is whether or not this is high or low tide. I tried to figure it out, but I couldn't make much sense of what I was reading. I'm hoping there's more shore at low tide, otherwise it's going to be a little tricky shooting there.

I guess we'll see how it goes.
Posted by The Monkey Rodeo at 5:07 PM No comments: Links to this post

It's been a couple weeks since I bothered with this here, things have been pretty busy otherwise so the movie has taken a bit of a backseat to everything else.

However that's not to say things have been progressing. Over the next couple weeks all the props and costume pieces for the one scene left have been coming in. As I start to see everything I can tell you this one little scene - which is the opening I might remind you - is going to be awesome.

All the makeup is now in, I'll be ordering the contact lenses this Friday and all that'll be left is one of the swords. It's already ordered, just on back order. Should be a couple weeks.

I'll be location scouting next week I think, so I'll probably post a few pictures of where we'll be shooting if it turns out alright. And then it's a matter of finishing the costumes and blocking out the sword fight and finally rehearsing it.

So I guess we'll see how things go over the next couple weeks. I wasn't expecting so much snow, so it might get postponed until a little later in February. Right now things looks pretty good out there, kinda cruddy and desolate looking is what I'm going for - easy to find here this time of year at least.
Posted by The Monkey Rodeo at 11:36 AM No comments: Links to this post