Pictured (left to right) Julie Laforest as Doris, Dempsey Perry as Ricky
and Draper Bulger as Vernon.
After several long days of re-prepping this project (it was originally scheduled for September of last year) and a 15 hour production day, 10-11 hours of which were spent shooting the 3 episodes for the mini web series, Home Sweet Hell is finally onto post-production.

We had 15 pages to shoot in one day and I don't think it would've been entirely possible had I not chosen to shoot it very simply, with very few cuts aside from the ones absolutely necessary. And it was the first time we've successfully shot with live sound - I've tried it on previous occasions and either gave up or was just very unimpressed with the quality.

I've thanked them on Facebook, but I'm going to again, thanks to the actors, Draper, Julie and Dempsey, our guest stars, Tim Gormley, Tanya Nicolle MacCallum and Will Becket. Kim Johnston my Production Assistant and our impromptu sound guy (and Dempsey's father) Dave Perry. Great work guys.

And now for everyone else:
Kim Bradford for the hand stitched sampler logo - it seemed to impress a lot of folks.
Phil MacNevin - the sound gear worked great.
Patrick Poirier - we have to move those chairs back today, thanks again.
Jason Rogerson (Moses Media) - kinda need a boom pole when you're using a boom mic, thanks.
Sharon (If don't know your last name and Kim's boss) - the chairs looked great in the set.

I think that's it, I feel like I'm forgetting someone. Anyway, thanks again. It was an incredibly long day and I was sore and tired as hell when it was all over, but I think it was well worth it.

One more thing, the first episode of Home Sweet Hell with be online for April 1st, the other two following the next 2 weeks.
Posted by The Monkey Rodeo at 12:26 PM No comments: Links to this post

Balam the Witch Doctor and Biff the Zombie

Finally got this photo shoot done and I'm pretty happy with how it turned out, wasn't sure how great it was going to turn out while I was doing it, but as soon as I saw a couple of the pictures I figured it had worked.

I had Kim Bradford as Balam the Witch Doctor and Draper Bulger as Biff the Zombie. We shot at a local doctor's office - who very awesomely let us use his examination room for this shoot.

And now for some pictures. 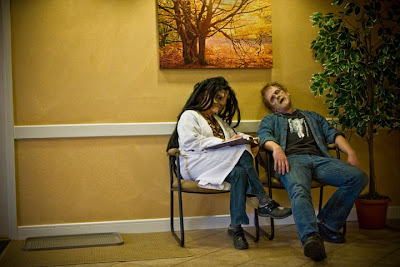 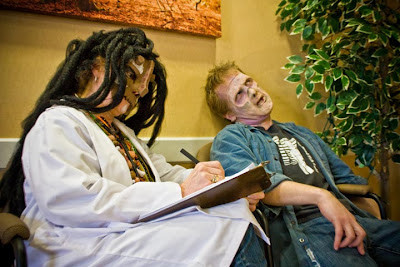 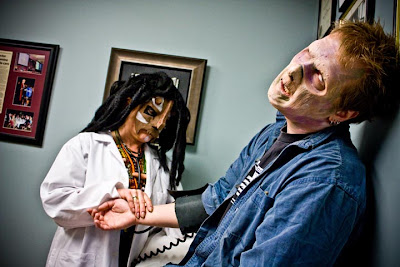 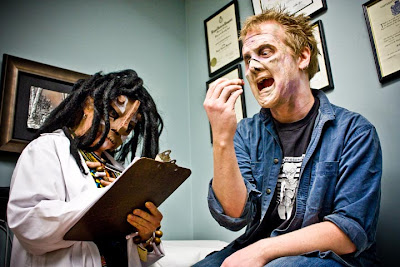 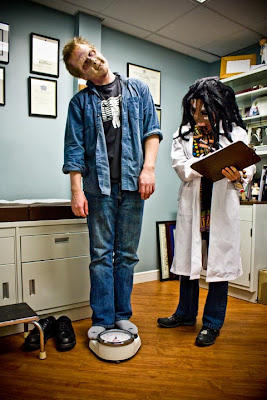 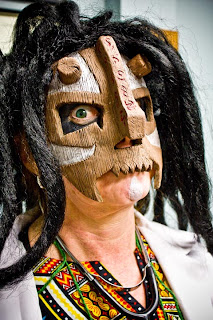 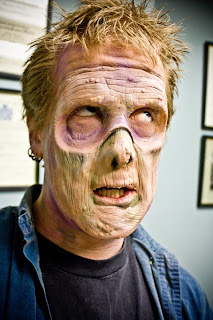 Posted by The Monkey Rodeo at 12:15 PM No comments: Links to this post

In the midst of a rather annoying pile of financial irritation (I'm putting this mildly) I've become rather busy with "work". That's the not making any money kind of work unfortunately, but more the keeping me busy kind. Which is good enough for now.

Managed to get a last minute photo shoot I've been wanting to do for some time finally on the go for this morning - which is awesome, it's been ready to go for a little while now.

And if everything stays it's course, we will be shooting Home Sweet Hell this weekend. FINALLY.

As well, we're shooting a sort of surprise video, not something scheduled and not a short movie of any sort, or web series or anything like that. Just a weird little video we're doing for fun and that should make it's way to the internet by next weekend I think.

And who knows what else will pop up. Guess we'll just have to wait and see.
Posted by The Monkey Rodeo at 6:42 AM No comments: Links to this post

Not much explanation needed. I made a website for the Demons project.

http://www.themonkeyrodeo.com/Karl/
Posted by The Monkey Rodeo at 1:25 PM No comments: Links to this post

The first official picture of Karl Wenham, the creator the photo book, Demons. For those who don't know who he is, Karl was created for the movie Malice. He was a demonic antiquities dealer. Once I started the whole Money Rodeo Project and was thinking of ideas for the various movie projects, I decided I really wanted to use Karl again - since I played that character and it was pretty easy. I don't much care to be on screen anymore, too much hassle when there's also makeup involved, the ideas for the projects involving Karl were easy enough though.

Here's the first image of Karl from a very unplanned photo shoot I did myself when I was bored the other night. 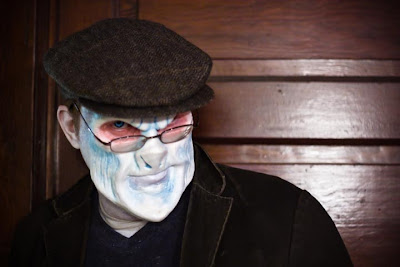 The makeup itself isn't exclusively my design. Originally the piece used in Malice was done by The Scream Team, I based my choice on the makeup off a single image taken from the front - upon seeing it in full I realized it wasn't quite what I expected, the nose was a little more piggish then I would've liked. Since then they have redesigned it further, totally (in my opinion) ruining what was cool about it.

I based my design off that one image, fixing the issues with the nose to resemble more what I liked about that original image. Overall, I'm pretty happy with it. This piece won't be made for sale, it was done off a mould of my own face and fit me and probably not too many others.

In other news, I've finally managed to get my apartment arranged to work a little better. I still need to work on getting my work room a little more tidy and efficient, right now it's a mess.

And a mould I was working on for someone turned out like crap. Turns out the model whose face was moulded has a little more curve to her face then usual - it's sloped very slightly inwards from the cheeks back towards the ears. At first I didn't think much of it, I thought maybe it was just an illusion created by the clay on the mould. Turns out I was right, the thing is locked shut now and the only way to free it is to destroy the negative mould somehow - not that it matter since the positive is unusable anyway. First time it's ever happened. Ah well, not the end of the world, but a bit of a disappointment since it looked really good.

It was only an old age piece, which I don't care to do because it's pretty boring - but this did look decent. Anyway, I decided there's no point in going back to it, just as easy for the person who wanted it to get a real old person then it is for me to start over again.

And, in very hopeful new, we've got Home Sweet Hell lined up to shoot next weekend. We'll see how that goes.
Posted by The Monkey Rodeo at 2:23 PM No comments: Links to this post

It's been not only an very long week, but a hellishly busy week.


For starters, I got my first wholesale order, not a huge one - but at this point I'm not being particularly pick about that sort of thing. Not like I'd turn someone down because the didn't order enough, that'd be kinda stupid. 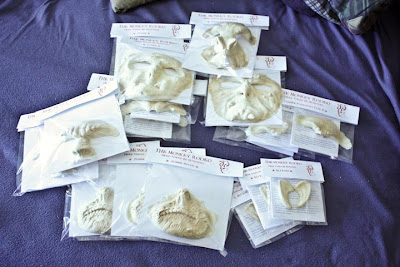 I also spent the week getting all the last minute paperwork together for a huge grant proposal for a project I'm planning on shooting summer of 2012 - planning on it if I get the grant, there's just no way I could make this movie without money and considering how many I've done with very little budget for any of them, you know this is massive.

To give you an idea, I'll actually be shooting with my first miniature set ever. This one scene would combine computer animated character (there'll be very little otherwise in the movie), green screen, miniatures, false background and actual sets. It's going to be awesome.

And I've decided to adjust my workspace a little bit. Currently this stuff is taking over my whole apartment and it's not that big in the first place. So after some serious apartment tetris (if you've ever moved crap around a crowded apartment, you know what I'm getting at) I have a whole room just for the prosthetic and prop work. Not a single bit of it will be lingering about in other areas. That will be awesome.

Now I'm waiting on potentially another wholesale order, not sure when that'll be coming along but I was assured it'd be soon.
Posted by The Monkey Rodeo at 3:43 PM No comments: Links to this post