Over the last year I've had a few folks mention this to me, and more then a few in the last week or more, so I thought I'd clear this up - supposing any of them read this. If not, that's their problem.

The misconception is that I made all the prosthetics that I've used so far in Malice and even Demon Rum - while I certainly appreciate the thought that these folks think I can do that kind of work, I didn't make them. I bought them, coloured them and applied them - that's all.

I am in the process of learning how to though, albeit slow and painfully useless so far. I've nothing to show for it yet, but within the month or so I'm hoping I will. Stay tuned for that of course.

Anyway, with that cleared up, I do have a little something something to show you. Mal'Vash, Malice's main villain, is about 98% complete - there's a few minor spots that need touching up, some things I'll probably let go because they just won't be noticeable on the screen. I guess it'll depend on how things progress from here - I might just want to be done with it and try to find a place where I'm satisfied with how he looks.

I did a little mock up preview poster for The Monkey Rodeo: Malice, it'll be the only image of Mal'Vash you'll see until the movie. It shows enough, but not too much I don't think. 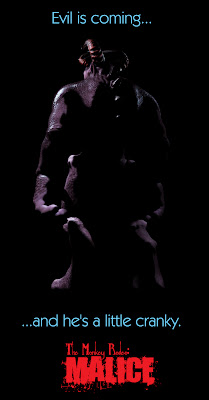 He's almost done. I'd say about 75%-80% done. And I think I can safely say he's easily the most awesome looking CG character I've ever done. I hate to give that kind of a buildup and then have to say you won't see it until you see the final movie though.

This month's looking a little crazy with other work, so I don't see him being completed for some time yet unfortunately.
Posted by The Monkey Rodeo at 5:18 PM 2 comments: Links to this post

Mal'Vash and some other stuff

It's taken a long time, but I've finally settled on a design for the big bad of the movie, Mal'Vash. It was pretty easy actually, just working out some minor details. He's modeled and being sculpted for more details at the moment - so far, so good. I'm hoping he'll be done in a couple weeks time.

Otherwise that's all I've been working on. I played around with some ideas for the prosthetics, nothing actually done - just sort of theorized what might or might now work. I'm hoping to get time this weekend to test the new idea I have for mold making and then perhaps even put it to the test and actually, finally making a prosthetic.

That's really it, nothing terribly new at the moment.
Posted by The Monkey Rodeo at 1:33 PM 1 comment: Links to this post

Prosthetic Pain in the Ass

I tried making the negative mold for the Cronus prosthetic today and was pretty disappointed with the results. There are certain things you just have to learn on your own I guess and that's about the best thing I can take away from it. 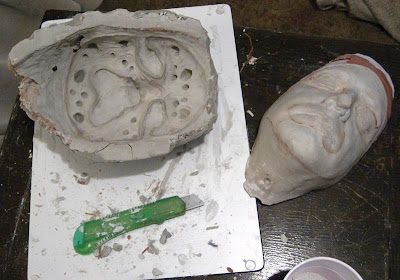 It took a while to demold, and at first I thought for sure it was garbage, but once I got it free I found it was actually workable with a little fixing, which went well - until I noticed 2 major imperfections that were just no way around. So because of two imperfection about a week's worth of work is trashed.

There's supposed to be a seam, where the negative mold meets the positive that's the edge of the prosthetic - in this case there was a massive air bubble and a half inch of the jawline was ruined. If I tried making a foam prosthetic of this - there'd be a massive ugly looking wart on his jawline or it just would've have torn the prosthetic when I removed it from the mold. 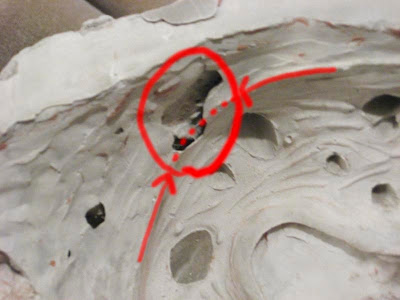 Here a good inch along the side of the nose had been chipped away. I might have been able to get away with this, but again it was right along the seam and I really have no idea how bad this would have looked. 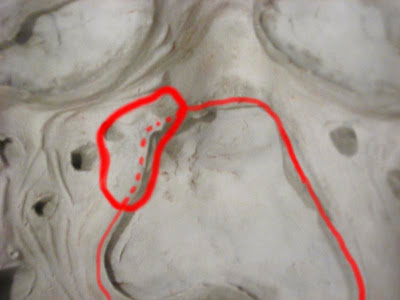 The thing is the sculpture is destroyed in the demolding process - it actually has to be in order to preserve the positive mold. One problem was dealing with the UltraCal, it's a tricky thing to work with - it stays too thin to do much with for so long and when it begins to set, you just have a few minutes or the whole thing is wasted. Luckily you can just add more, but it can cause some unwanted lines in certain cirsumstances.

Also, I used these resin horns from a prosthetic I bought on the one I was making and a couple were also destroyed in the demold - so this is a bit of a setback and a massive dissappointed really.

Although, I did learn a lot in all the mistakes I made. Doesn't change that I lost a lot of work, but I know better for the next time around. I don't know when I'll have the time or materials to make another mold of Draper's head - I still have the original, but it has problems I was hoping wouldn't cause more problems, which it did - but I guess that'll be the next step.

I have some ideas on how to make it work better next time already and some ideas to remove some of the "one use only" aspects of the process. We'll see.
Posted by The Monkey Rodeo at 4:15 PM 1 comment: Links to this post

I finally had time to work on the first prosthetic for The Monkey Rodeo: Cronus. I made a small set of horns before this - not in the foam yet, just sculpted and made the molds. I was trying to figure out a right ratio for a small batch of foam to just do the horns - I gave up and decided I might as well start the face prosthetic for Cronus (there will be more for other characters). 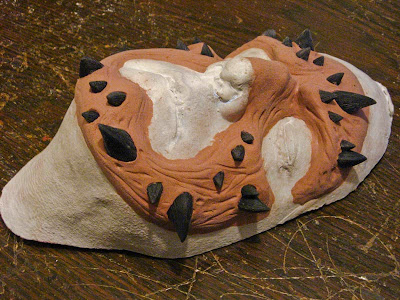 It came out not too bad, not awesome, but this was my first ever attempt at sculpting something like this. The horns all came from another prosthetic that I bought online in hopes of it being the right for Cronus - it looked great, but it was way too small for Draper's face. So I decided to make my own based off that one.

With the one I bought, the horns all had to be glued on separately, I decided to make it all one piece. I'll find out soon enough if that was a bad idea. I'm going to try making the negative mold of this tonight possible, so we'll soon see how this is going to all work out.
Posted by The Monkey Rodeo at 4:45 PM 1 comment: Links to this post