Got yet another little prop for the shop done today. It's a Golem Icon, you can't see it from this angle (because I was too lazy to turn it around and take another picture apparently) but it has the Hebrew word "emet" (truth) on its back. Why? If you're aware of Golem lore (and in cause you're confused why this looks nothing like the skinny little fellow in Lord of the Rings), the Golem had the word "emet" on its forehead and removing or destroying the first letter left the word "met" meaning death, which would deactivate the Golem.

There's a variety of legends, but some have it that Golems could be reactivated by writing a specific series of letters on parchment and placing the paper in a golem's mouth. In this little fellow's case, the legend has it that a Golem required a heart, in order to prevent some problems encountered with previous carnations of the creatures, which usually ended with them turning on their creators. This one, requiring a heart allows the Golem more freedom and more intelligence - thus making for less Golem Creators deaths.

The Golem Icon, specifically is a deactivated or dead Golem. Once the heart has been removed, the creature shrinks to a harmless size, unable to reinsert a full sized heart it remains deactivated although retaining some measure of its original protective aura - for which Golems are normally created. So it is in effect some minor form of protection against those who would do the bearer harm. 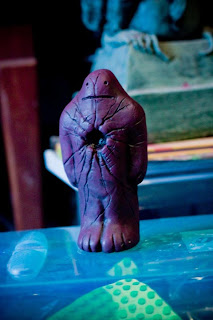 These will be for sale online by mid-April. Although if you're incredibly impatient and simple must have one right now, get in touch at foxhenderson@themonkeyrodeo.com and let me know. This is a prototype and was cast in a grey resin, a coat of black paint was added to darken the details and the overall colour, red was the dry brushed on. The final version will be cast in a red resin and the black added after, darkening it. I'm not sure what the final price will be, but I'm starting around $15. It measures 3 3/4" tall.
Posted by The Monkey Rodeo at 10:35 AM No comments: Links to this post

The return of the "Thing in a Jar"

I'm starting to feel like I took on a little too much in doing this trade show thing. It's been good, I've done way more for the shop in the last 2 months then I have in the last year, but it's been way too busy and my brain is slowly burning out.

Got a few things left to make and thankfully I was able to get my "Thing is a Jar" made.  I had all but scraped the whole ideas as of last week because they weren't working for a huge number of reasons. Main one was the materials, I wasn't happy with them. I saw a thing online and a guy made them out of foam and whatnot - that sucked ass.

While I'm sure other's have had luck, you need the perfect sized jar so the "thing" looks alright. Mine floated and when I say floated, I mean they hit the roof of the jar like it was metal and the lid was a super magnet. Looked stupid. Then I tried to find the right jar size, no such luck.

Finally, after I gave up, I tried one made of resin. Everyone else was using Sculpey, but they were one-offs and I want to mass produce, so I figured it couldn't hurt using resin. I already had the mould and it was all set to go. And it worked perfectly, even got that gross peeling skin effect I couldn't get with the foam version. 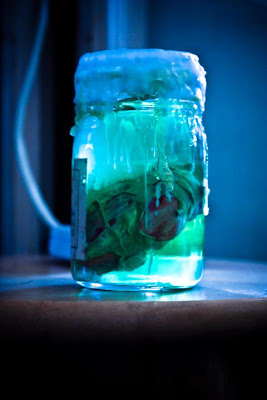 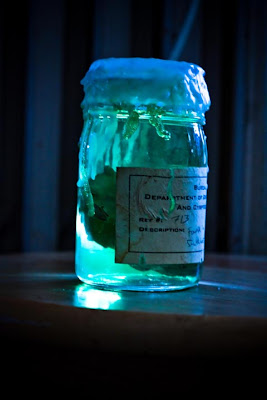 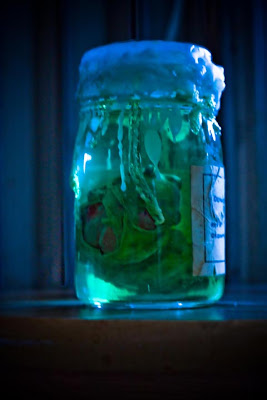 Still got a few kinks to work out. I need to redo the label, make it more aged looking somehow, got a few things in mind for that. Overall I'm pretty happy with how they turned out and I'm hoping to get at least one more, possibly two more, ready for the trade show. I'm hoping there's time to order the illuminated stands I was looking at, so they'll glow from underneath, too bad I couldn't make my own, it'd look nice it they had an aged wooden stand with a light in it. Anyone out there with the skills to make that happen nice and cheap, please let me know.
Posted by The Monkey Rodeo at 11:08 AM 1 comment: Links to this post

The script for the Bimbo Zombie Killers! Web Series is coming along pretty well. There's going to be a decent sized cast needed for this as well as a pile of other folks most likely needed to pull this off. It's all on a volunteer basis - we do this for the fun of it and the experience, and I don't mean experience in become professional filmmakers or actors, but the experience of getting covered in blood and gore, killing zombies or whatever the hell I decide to write.

Given the scope of it, 12 episodes, each 5-7 minutes long, there's a lot of work and scheduling could prove tricky. If you're someone with a tight schedule, it's up to you if you want to be involved, but you are going to have to work with us in order to make sure everything goes smoothly.

This is going to be a little more violent, gory and possibly creepy and slightly scary, to some, in places then the previous two movies. While it'll be just as stupid and goofy and b-movie-esque as ever, I'm hoping to give this a bit more atmosphere. Think of this as our Army of Darkness addition in the Evil Dead Franchise, I'm really looking to up the overall movie experience this time around.

The plan is to shoot over the course of this summer, starting first weekend of July, mostly on weekends, but that plan could shift and alter as the project proceeds. I'm keep the script more or less a secret for now, those involved will only be getting scripts to the episodes they're in. I'll be posting a cast list eventually and deciding who works best for what and working with everyone to make sure they're doing something they're happy with.

Most of the lead roles are already cast, but I haven't finished writing it, so who the hell knows how many people, living or undead, I'll need. You might be needed for only one episode, (one days shooting) or the whole thing. No idea yet, just want to see who's interested.

So if you're up for it, let me know. Send me an email at casting@themonkeyrodeo.com, let me know what you're interested in doing. If you're waiting an acting role and we've never met, send me a picture and an acting resume if you have one - not that I give a crap about acting experience, but I do like to cast people accordingly. If you look the part, that's enough for me, no auditions necessary. If you want to help out behind the camera, we're mostly covered, but an extra random hand or two here and there is always an asset.

And that's it. I'm hoping to get the first episode out in time for Halloween, although there's the possibility for those involved of having a special screening with the whole thing mashed together as a feature length movie.
Posted by The Monkey Rodeo at 12:57 PM No comments: Links to this post

Just sent these things off to get printed. I needed a couple banners for the trade show coming up and decided to go this way. They'll be 2'x4' and hopefully awesome. 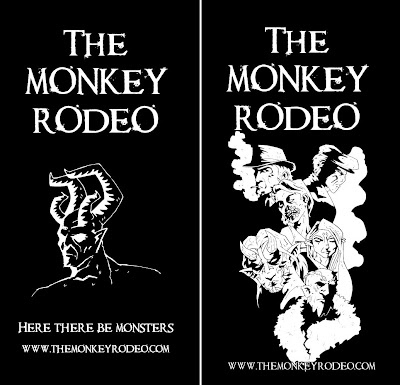 And yes, they're very Mike Mignola inspired, for those of you familiar with his work. A lot of companies doing FX work and the like usually go with images of their work or overly tacky images of who the hell knows what. My logo is just the one on the left, the right is something I did up just this weekend because I wanted 2 different ones.

I'm still working away on some new props, hoping to get to making some new epoxy prosthetic moulds before too long as well. So far the only snags I've it are with the "Thing in a Jar" props, looking like they may not be happening. So far it's been impossible to find a decent supply of the right sized bottles/jars I'm needing. With the first "Thing" already made, I need a very specific jar size, around 2 1/2" wide x around 4" high, and obviously nothing with relief designs on the the glass, that'd be a little retarded looking.

I found some stuff, but in the US and most ship by UPS only - which pretty much rapes you on customs fees. Anything I've been able to find in Canada doesn't have the proper sizes listed or demanded a minimum order and blah, blah, blah. It's been pretty annoying to say the least. I'm sure I'll find something, but so far after 3 or more weeks of hunting I haven't been able to find anything.

Hoping to get the first "Shrunken Demon Heads" out this week. As well as a couple of the foam weapons. Ran into a bit of an issue with the hatchet handle mould, but hoping the 2nd try works out okay.

And the "Magnet Sculptures" turned out great. Had an issue there too with actually finding a decent supply of magnets that were strong enough to hold up a 40 gram resin disc - not too easy. In the end I went with a self adhering magnetic tape and after a bit of work they seem to work pretty damned good.

Other then that, got a few other things planned, just need the time and materials to see them through before the show.
Posted by The Monkey Rodeo at 1:55 PM No comments: Links to this post

"The Secet Lives of Demons" is finally for sale online!

It's finally up for sale online!

The Secret Lives of Demons by Karl Wenham | Make Your Own Book
So feel free to check it out and buy copies for every possible person you've ever met and make sure to get extras for any homeless folks you might meet.

For anyone unfamiliar with the whole project, it's a collection of photos of various demons. The demons were created specifically using generic prosthetic makeup (meaning it will fit most everyone) that I sell at www.themonkeyrodeo.com. Some might think the demons aee a little on the undramatic side, but keep in mind what I just said - they were created specifically using makeup designed to fit most everyone, the intention was not to create something only made for one specific model that only a professional makeup artist could use. This stuff was made for everyone who wants to use it
Posted by The Monkey Rodeo at 2:22 PM No comments: Links to this post

It's finally done, just got the first copy and went over it. Only a few minor spelling mistakes in what little text there is - spelled a few names wrong, otherwise I could care less about mistakes like that in this case.

It'll be going online for sale this afternoon, just uploading a fixed up copy now and double checking it once more. 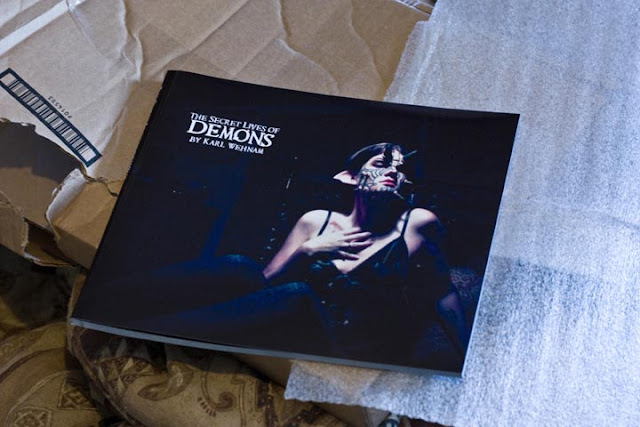 Posted by The Monkey Rodeo at 9:53 AM No comments: Links to this post