And the awesome rambling story behind it.

Had another video/photo shoot this week. It'd been in the planning for ages it seems, but given the logistics of scheduling it languished around for a month or two. Finally happened, but man it was a rough start.

I was up at 5am, makeup was scheduled for 9am and we were supposed to arrive on location at 11am, where we had the place booked for 2 hours. We had an issue with some of the girls not getting back to us in time to confirm their involvement, as as we got closer I decided to find a replacement and then of course two days before everyone's confirmed in. That irks me, but whatever, everyone was onboard and I felt like a bit of a dick having to tell this one girl I lined up that I didn't need her...And then someone cancelled.

So, Julie, the one I contacted outside of the original 5 contacted by Savannah, was back in but just had her car break down so was unable to make it. I figured I could just drive out and get her, no problem.

At around 8, I contacted Draper, made sure we had all the instruments only to find that he had no keyboard, so a last minute search ensued for a keyboard. I loaded everything into the car and proceeded to drive out to get Julie, only to have my car make some pretty horrendous noises. In the end she took a cab, we found a keyboard and made it to the office where the makeup took a little longer then planned  - couldn't even get into the office at first, thanks to one of the girls, Allison we did.

From there it wasn't too bad. My back was already sore from hunching over doing makeup for about 5 hours on another shoot on Tuesday, this didn't help. At least I had someone else doing makeup with me, Michelle Cudmore. She does normal makeup, this was her first time playing around with prosthetis and she did a really good job, this would've taken forever without her help.

We were a little late to the location, The Guild, but managed to get going about 45 minutes into the 2 hours I had the place booked for. I assumed we'd need a third hour, but we finished shooting about 2 minutes before our time was up. Awesome.

Took some photos in the park, scared some children. Typical day I guess. Overall, pretty happy with the results, even though my car is currently immobile until I find a replacement track arm. Ah well, had nothing to do with the shoot, so who cares.

Everyone did a great job and even though I've thanked everyone a number of times, I'll do it again. Thanks to Savannah Belsher-MacLean for rounding up our "BertPalmerro Girls" and allowing me to use her office, this would've sucked without her help. Kim Bradford for making the dresses, would've cost me a small fortune to outfit everyone properly. Michelle Cudmore for helping with the makeup. The folks at The Guild, especially Eric (whose last name I never caught) the lighting/sound tech who had to endure that song about 6 times.

And now a couple more pictures I think, even though I said I wasn't going to post many any more. 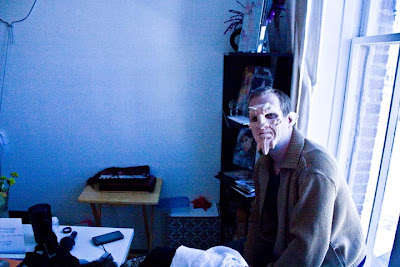 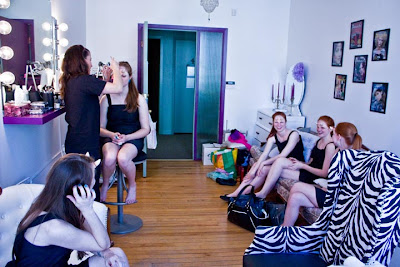 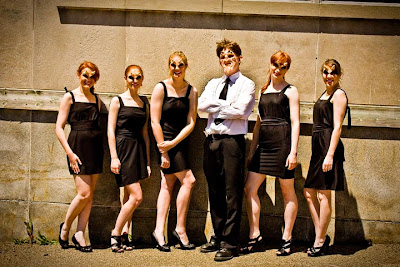 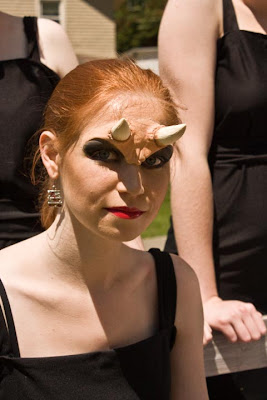 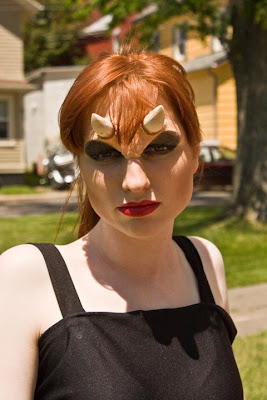 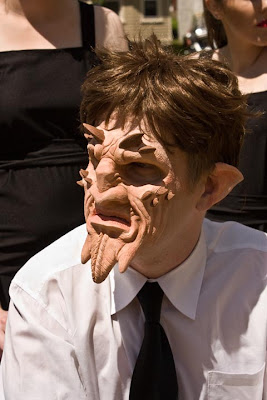 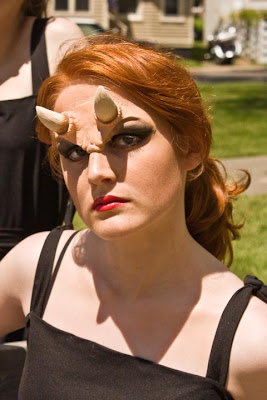 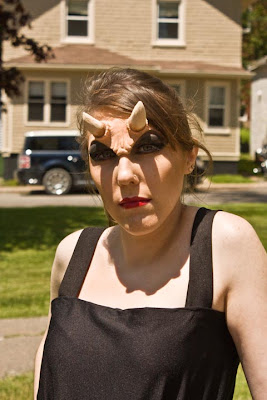 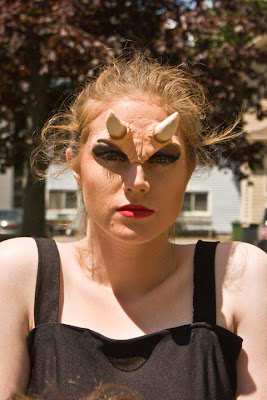 CAST AND CREW: If you're interested, send an email here and making sure it's labeled something to do with Bimbos or Zombies. Make sure to read all the crap below before signing up though. Also, this really only pertains to people on Prince Edward Island - but feel free to read on otherwise. 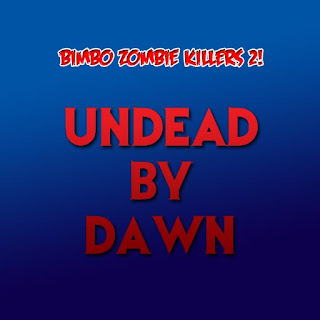 Apparently there was some interest about doing a sequel to Bimbo Zombie Killers! While I had no plans to ever do a sequel, I certainly had no objects if I got some actors interested and had some major assistance in getting it organized.

Well, that has almost happened. And yes, there will be a sequel I believe. And it will be shot in August if all goes as planned, maybe even earlier if things come together. It all hinges on things coming together. I have a lot on the go, so I won't be able to spend my energy making all the arrangements like I normally would for this.

If you're interested, you're down for more then just stumbling around groaning trying to find brains to eat - I need everyone to pitch in however they can. Even if it's just finding a couple more extras for me.

THE STORY: Undead By Dawn is not a direct sequel, in fact you never have had to see the original to even get this movie. It's, I guess, what you call a conceptual sequel. I plan on bring in my two original actors, Draper Bulger and Heather Panton to start the movie off - but that's it. Moonshine will still be the cause of the outbreak and that's as close as it'll get to the original. It won't affect the story of the original, it's not a reboot, in fact both could have actually happened in the same world just so happens that some of the individuals involved might look alike. This is Return of the Living Dead 1 and 2 reference for you hardcore zombie movie fans.

While the original was an homage to 70s splatter grindhouse sort of films, this one will be a direct homage to Evil Dead 1 and 2 (hence the title if you haven't figured it out by now). The first person who thinks they're suddenly intelligent and starts screaming rip off, will indeed get something ripped off - might be their junk, who knows.

The script is underway, the plot is already worked out.


WHAT I NEED FROM YOU!
Actors. There will be 5 leads. 3 girls, 2 guys.  I'm looking to cast 1 more guy and 2 more girls - costumes will be similar to the original most likely. So if you're not comfortable being a little skanky and trashy, this probably isn't for you. There may be more parts as the script is developed, so stay tuned.


Zombies, I'll need lots of zombies. These zombies will not be like the original, these will require makeup - and not cheap shitty stuff, we're going all out if possible. So if you've got a beard, you'll probably have to shave it unless I say otherwise. These zombie will be long since dead, coming out the ground redneck zombies. What is a redneck? Do a Google Image search, you'll figured it out. So if you want to be a redneck zombie, you'll need to dress appropriately and costumes will need to be properly distressed as though you've been in the ground for a long time. If you don't like getting dirty, you might want to stop reading and forget all about this.

Location: A cabin in the woods. Doesn't have to be abandoned, but if it is, it has to be usable and with electricity nearby. A shack nearby would be awesome, but we can work around it if there isn't one.. It must be on PEI and preferably near Charlottetown, I don't care for cutesy useless replies - again, ripped off and your junk possibly.

Weapons and Props: I will need some shotguns or something mostly likely. If you got an old double barrel you'd like to part with so I can remove the firing pin to make it safe, that'd be freakin' awesome. Otherwise just let me know if you can help out here and feel free to let me know what weird old farm tools you might have that'd make good weapons.

Special Effects Makeup Assistants: Since there's going to be a lot of old school looking zombies this time around, we're gonna need makeup - a splash of blood just isn't going to cut this time. Obviously there's not too many local folks who know a lot about applying special effects prosthetics makeup, so I'll be giving those who want to volunteer for this a crash course at some point.

As usual this is all volunteer. Please don't sign up if you're not going to show up, you'll just make it more difficult.

And finally, any questions or concerns or anything about this project, please ask away. You can email me at casting@themonkeyrodeo.com - if you try to contact me any other way about this, I'll just get lost in the shuffle and you'll end up crying because you're being ignored. And that's sad, so don't do it.

I can't believe I'm doing this again.
Posted by The Monkey Rodeo at 3:53 PM 1 comment: Links to this post

Bimbo Zombie Killers! to be featured in a Zombie Encylopedia

Had some very awesome news today. Apparently, as the title of the blog suggests, Bimbo Zombie Killers! is going to be featured in a Zombie Encyclopedia - which is exactly what it sounds like. A book devoted to zombie movies, this I believe with be the 2nd book. The first one is available for sale.

I received an email yesterday from the author, saying he was here on PEI visiting friends and wanted to have a quick talk to me about the movie. I spoke with him on the phone today, he asked some questions and whatnot about the movie and said he would like to include it in the new version of the book.

I don't know when it's going to be released, but I'm going to be keeping an eye out for it.
Posted by The Monkey Rodeo at 4:04 PM No comments: Links to this post